Double Post (Because I Didn't Write Anything Last Night) 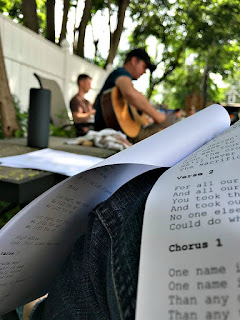 I woke up a little late, took my shower, and logged into Church Online, but partway through I made a last minute change of plans. I hopped in my car and drove to my son's house as quick as possible. I didn't want to miss "Worship in Our Yard." I arrived early, in time to soak in a warm hug from my boy, and visit Numbers 7 and 10 before any other guests arrived. I haven't been to physical "church" since March 8, sixteen weeks. It was the perfect morning, the perfect gathering, and I left perfectly blessed. 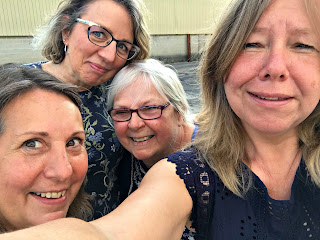 It was a lazy afternoon (I even took a short nap on the living room carpet). Mid afternoon I met my friend Chris and we drove out to Canandaigua where we met two more friends for dinner in the Beer Garden at the Rheinblick German Restaurant. So fun and so yummy! Another wonderful weekend.

I've found that cleansing (and healing) old wounds can be a detailed process, especially if the original wound isn't dealt with properly. It might even need to be reopened and cleaned again. The "wound" I speak of doesn't ache and bleed like it did years ago. The deep and hidden grief is past, and the raw, throbbing ache hasn't plagued me for a very long time. I can't even recall the last time my heart needed stilling due to the pain. I thought it had healed, yet I've found it helpful in recent years to revisit the wound and drain any remaining debris. (Are you confused yet?)

I've written about Joey a couple of times (here), but the years of battling deep loss are difficult to admit. I grieved his loss silently and alone. How could I admit to the heartbreak inside when I had married James? I couldn't. I had little ones to tend and a guy who needed me to love him. I buried the sorrow over and over again until the sands of time dulled the ache.

Joey was a childhood friend who "loved me" according to his sister, and that is where our relationship began. Our time together couldn't have lasted more than 6 or 8 months while in third grade. He moved here in late fall and moved away before school was over in the spring. He showed up at our door with his cousin and sister one spring day to say goodbye. It was the last time I would see him because he was moving. That could have, and maybe should have, been the end of the story, but even as a child I had an overactive heart. When a letter arrived a few months later, my mother talked to neighbors and hunted down a return address. It was 1973.

James entered my life the summer of 1979. I'd never had a "boyfriend" other than Joey, and Joey still had my heart. Through the years I'd received a handful of letters, a few school pictures, several phone calls, and we had stopped at his house in October of 1978 while we were on vacation to Virginia. This lonely girl couldn't help but be smitten by the handsome football player of her childhood, but there was another boy in town, one whose heart was hurting and I became entangled in another web of hopes and dreams. (Cleaned up story here) Each time my heart returned to the thought patterns of my childhood, I took a few minutes to grieve and then pushed the sadness from my heart and mind. I couldn't live there.

When things unraveled between James and I, I found the need to seek out the little box of letters from the child/teenager of whom I'd once dreamed. It wasn't  re-connection I was looking for, it was closure (again), and I found it, like I had before, reading the letters. I didn't find the boy of my dreams tucked into old envelopes, but a guy with some self-centered tendencies I'd been blind to as a girl.

The internet has the unthinkable way of making what was once totally impossible, possible. It's way too easy to learn a smidgen (or two) about those we once lost track of. My childhood friend appears to have done well in life. He has a beautiful and successful wife, two handsome, now grown children, and an incredibly huge house on the banks of a well known river. I've stared at him in photographs, trying to catch some glimmer of the little boy/teenager I once knew, but the years have taken a toll I know nothing about and he is unrecognizable to me. I wouldn't have given him a second glance had he bumped into me on the street. At least I don't think so. Maybe my subconscious would know something I didn't pick up on with my conscious mind. ?

My friend and his wife live in what looks to me like a mansion. It's for sale. Over $1,600,000.00! A mansion has never been in my plans, especially one with five bedrooms and five bathrooms that all need to be cleaned. (Can anyone really use that many bathrooms?) There may have been days of raising children when I longed for a place to escape, but 7400 square feet seems a little bit overkill. (I have absolutely no clue what my old friend does for a living. Maybe he doesn't work at all... Ha ha!) I'm not glitzy and glamorous. I don't even wear make-up other than mascara. She is the national sales director in a extremely well known company, and has won numerous awards. (What does one person do to win 13 all-expense paid trips and 19 cars?) Oh, my! More than anything I am amused. I genuinely hope and pray they are truly happy.

Maybe all those years ago my mom thought our puppy love friendship was cute, but in reality she had no idea how deeply I would entangle my heart in future hopes and dreams. I'm sure she thought the relationship would slowly fade away and become nothing more than a sweet childhood memory. Maybe it finally has...
Posted by Martha at 5:54 PM

Labels: About me, friends, memories, out and about, Worship in the yard