* It's been a strange week but I'm not totally certain I can tell you exactly why. 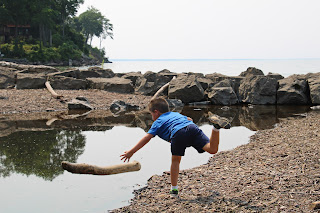 * I took Idris (Number Nine) to the lake on Sunday. Sticks, stones, water. He loved it! On Monday he asked if we could go back, so we did. Tuesday night he asked again, so back we went. Wednesday night I went alone.

* I went to work a little early on Tuesday morning and was in the kitchen when one of my toddler friends was dropped off for the day. I saw his dad's and brother's backs through the open kitchen door. I can't remember what I was doing, but I didn't get the chance to greet them that morning. It was Wednesday morning when I learned of the drowning. My sweet little friend's dad jumped into the canal to rescue his dog and was pulled under by the current. He did not survive. The dog was able to get out on its own and the brother was unhurt. My heart is aching. 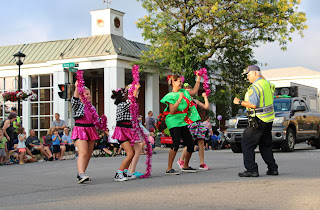 * The firemen, who didn't have their carnival this year, pulled together a parade which we attended on Thursday evening. It was short and not all that sweet. Just a fleet of emergency vehicles, a few from two nearby towns, one or two floats, an ice cream truck, and a dance group. The theme was Christmas in July and when the parade was over a little boy next to us voiced his disappointment. "I didn't even get to see Santa Claus!" he protested.

* We've completed two weeks of Two Daycare Centers Become One. We have plenty of staff, all we need is more children.The toddler rooms are hopping and we have an up and coming list of babies, but what we really need is to fill up the 3 and 4 year old rooms, and beef up the school age class. Our menu was interesting this week. I had to get creative a few times but nobody went hungry unless it was their choice. 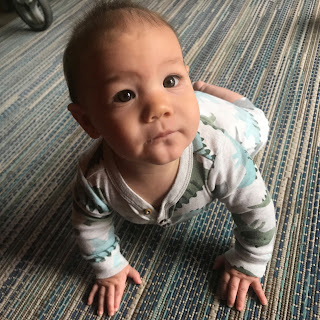 * Our baby is a creeper. I mean he's crawling. On his hands and knees. He's only six months old but somebody forgot to tell him. He's quite happy with this newfound skill. Good thing Hannah ordered that new baby gate!