E is for Eddie and Eddie.

These are my mother's parents, the grandparents I never had the chance to know. Her name was Edna and his Edward. They met at Christian Endeavor and were married sometime in the 1920's. She had been an only child, and he one of six. Together they had four children, three little girls and a boy. 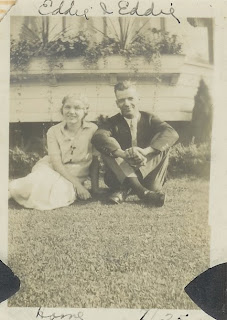 I know little about my grandma except that she was a well behaved child who seldom needed discipline. She was not only an only child, but had no first cousins either. She owned a copy of the book "The Poor Little Rich Girl" and Mom often thought it may have personified her mother. When she died at the age of 33, she left behind a well worn and marked Bible.

Grandpa raised his four children with the help of extended family. His own mother moved in to the little house 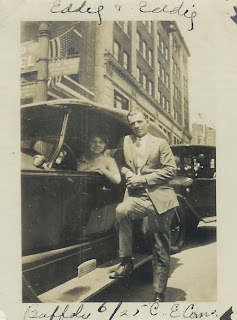 and the children were surrounded by aunts, uncles, and cousins who lived in the same neighborhood. Grandpa was a practical joker and people watcher. He loved his children and was a strict disciplinarian. Though stories about her momma, who died when Mom was just five, are few, many are the stories she has told about her dad. He loved onion sandwiches, and used to feed me tiny bits of mustard or pickle juice on the tip of a spoon when I was a baby and laugh at the funny faces I made. Grandpa died of a heart attack when I was just 20 months old.

To see the other participants in the new round of ABC Wednesday, click here! 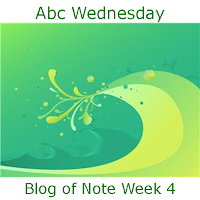 Imagine my surprise when I won a Blog of Note award for last week's entry! Thank you everyone!
Posted by Martha at 9:46 PM

Martha
Apple country, New York, United States
I am a work in the hands of the Master Potter. I pray that His fingerprints are all over me as I walk through this life. This is my journey. Thank you, Jesus, for not giving up on me. I am mom to seven beautiful grown ups and grandma to seventeen, beautiful grandchildren.