It was a beautiful weekend in spite of the fact that I way overslept Saturday morning and didn't get up until 10 am. I'd been downstairs to the bathroom at 7 o'clock and climbed back into bed for "a few minutes." Ha ha. Three hours later I was appalled at how long my morning nap had been.

Early Saturday afternoon I took a ride to the home of my former assistant pastor whose daughter is a missionary in Guatemala. The country is entirely shut down. The people aren't allowed to leave their homes and many of them are starving. I'd saved up some money over our own shutdown with the intent to donate it somewhere. This seemed like a good time to put my plan into action. I found Lydia's parents appreciative and enjoyed a visit with them before moving on. 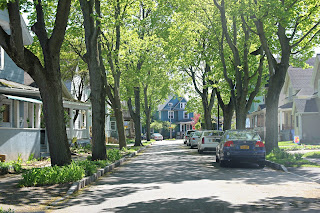 My second stop was the pottery studio. It has been mostly quiet and still there, but I knew I had some pieces waiting. I found a few bisque fired cats on the shelf, but no finished pieces. Perhaps they were in the smaller kiln and will be there next time I stop. I snapped a picture of the side street where I parked, just because I think it's pretty. 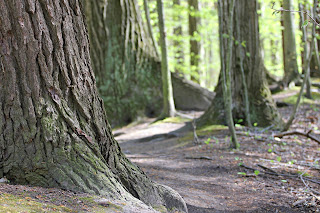 Later in the afternoon my sister Rachel and I took a walk in Gosnell Big Wood Preserve. It was not a lonely walk, but it was pretty. There is something very soothing about a walk through the trees and especially so when the trees are massive. It was a good little hike. 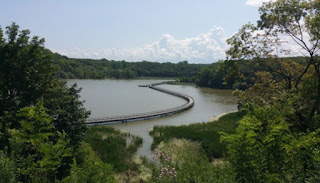 Today, after church, I went to meet my friend "Betty," whose name is actually Barbara. It was 11 am when we started off on the trail along the Genesee River from Turning Point Park toward Lake Ontario. We walked all the way to the end of Charlotte Pier and back again, about 6 miles. The breeze down by the lake was cool, but the sun was bright.  (I intentionally left my camera behind, so this is a "borrowed" photo. We walked the trail over the river.)

I feel as though I have known Barbara forever, but this was just our second face to face meeting. We share a story and know each other's heart in a way not many others do. We hugged each other upon leaving and it felt so good to hug a friend. It's been a long time since my friends have felt free enough to give me a hug. Only one other does that now. 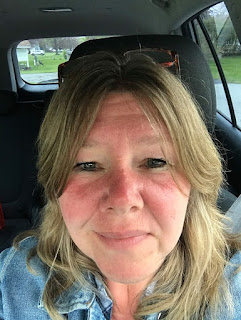 I came home tired and climbed the stairs to my room. The house was quiet and my feet achy. A cup of coffee kept me company and I began to relax. Soon my face began to feel strange and it dawned on me that our walk had taken close to 3 hours. I'd not thought about how bright and intense the sun was until I was home again. I look a little like a lobster. Ha ha! 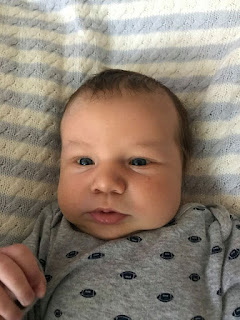 Late this afternoon I stopped over at Bethany's house to steal a snuggle with Henry. He's the cutest.
Posted by Martha at 7:39 PM