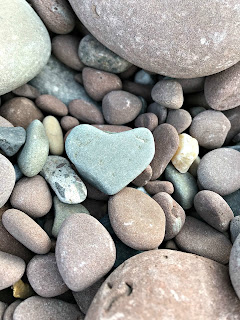 This afternoon I again went to visit my friend Gail at her cottage. We walked down to the water and scoured the rock shore for beach glass, she searching for large pieces, and I picking up crumbs. Tiny bits of glitter on the shore; clear, white, amber, green, and cobalt blue. 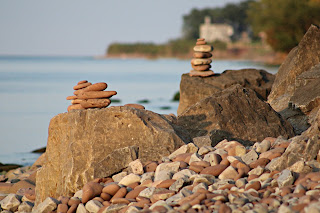 I sat directly on the rocks as I searched the shore, scooching over every so often, picking bits of glass from the stones, and once in a while getting up to look from a different perspective. We'd started at the far east end of the beach and worked our way toward the opposite end, dropping whatever we found into plastic bags. 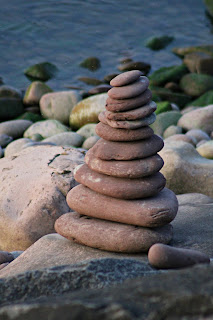 I'd already reached the other side when I put my hand on my back pocket to check my phone, but my pocket was empty. I was certain my phone was back in my car and didn't worry. It wasn't until we were on our way back when I remembered I'd had my phone inside Gail's cottage before we'd headed to the beach. Maybe I'd left it in her bathroom...  Nope. I told Gail I'd lost my phone, and headed back to the beach to look for it. I didn't worry that someone else had picked it up. Holland's Cove's a private little beach, tucked into a small cove, and there weren't many people there today, just a few women sitting in lawn chairs toward the western edge. 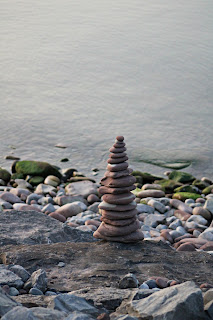 It was a short walk. I said a quick prayer as I started across the rocks toward the water, and there on the shore was the biggest piece of "beach glass" I'd ever found! (It was actually my phone.) 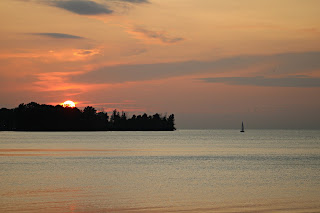 Pictures are from this evening's jaunt to the park in Pultneyville. Gail and I bought sandwiches at the deli and ate them in the park. The lake was smooth and calm again. 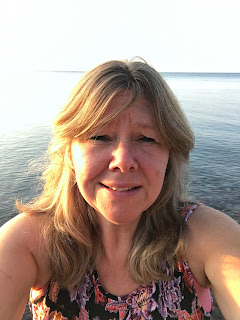 * I lost my phone last week too, while my sisters and I were on our way to Ithaca. I'd had it when we stopped halfway to use the potty, and when we got to our second potty stop half an hour or so later (It was the coffee...), it was missing. I looked around in my car and saw nothing. Rachel called me and we couldn't hear anything, but her service is spotty.  I thought Priscilla should try, and if someone answered, we would know it was in the convenience store in Ovid. If successful, we could call Laurie (Priscilla's SIL) and see if she would retrieve it for me, but when Priscilla called my phone, we heard it ringing. It had slipped under my seat and was hiding.

I'm okay, friends. I'm really okay. Doing fabulous and enjoying the life with which God has blessed me. He is so very good.